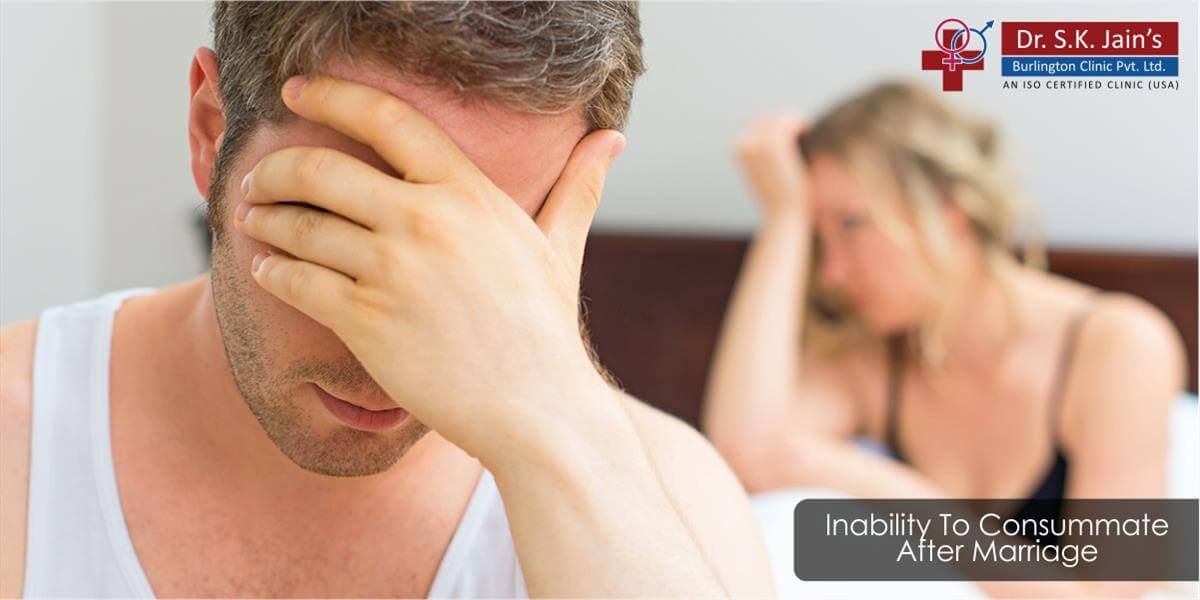 Inability to Consummate After Marriage

Many couples are unable to do successful vaginal intercourse after marriage due to various reasons. The cause may be in man or women. Each of these below mentioned causes for non-consummation of marriage are investigated & treated scientifically.
Thus first of all you find out your likely cause then from home age read that disorder in detail i.e.
The male cause leading, to inability to vaginal penetration are as follows:
1) Erectile dysfunction: i.e. due to less penile hardness due to various causes.
I t may occur due to complete erectile failure: i.e. some men achieve no erection et all. For others, an erection may occur in the regular manner, but as the love play continues the erection is lost (we call it maintenance failure). For still others, the erection may be maintained very adequately up to the point of entry. As soon as entry is either contemplated or attempted, the erection disappears (this is called entry failure). For some, erection may be maintained beyond the point of entry, and then wanes after a period of activity inside the vagina (this is called mid-act failure). No matter when the erection goes away, its loss is always troublesome. Erectile dysfunctions though a benign disorder has a great impact on the affected individual. Patient feels frustrated, depressed, and ashamed, has lowered self-esteem & may even disturb his family relationship. There has been an explosion in the interest in male sexual dysfunction with the development in techniques of modern scientific diagnosis & treatment of male sexual disorders with very good treatment outcomes. Now majority patients are cured by proper diagnosis & correction of the defect. Thus consult us at our centre & get rid of this problem for always. For detail read the diagnosis & treatment of this disorder Erectile Dysfunction (Impotence)
2) Premature ejaculation:Premature ejaculation (also known as early discharge or quick orgasm, early fall, Shigra-patan) is one of the important cause of non-consummation of marriage and is characterized by sudden ejaculation of the semen, just prior to or immediately after vaginal penetration during intercourse (before one wishes or before he could satisfy the female partner). Premature or 'before time' in other words, is a condition where the man has no voluntary control over his ejaculation. He is quick on the trigger once he starts the coitus. This is a very frustrating disorders of male sexual function in which man feels totally helpless. This leads to bitterness in husbands & wife relationships. For the man, lack of control of his body functioning leaves him feeling unsure of himself. His pleasure is often decreased by the abrupt early discharge. When a man is, feeling inadequate, and ejaculating fast, the woman will probably be left unsatisfied. This is an easily treatable condition. For details of diagnosis of its cause & treatment click
Premature Ejaculation (i.e. early discharge)
The various Female cause leading, to inability to vaginal penetration are as follows:

1) Vaginismus:In vaginismus involuntary painful contraction of vaginal entry muscles (i.e. vaginal opening) is so painful that entry is virtually impossible. So that due to spasm of introitus muscles there occurs virtual closure of the vaginal opening with significant pain. Vaginismus is one of the significant female causes for inability of penis entry into the vaginal opening. Thus this is one of the common causes of for non-consummation of marriage.
In vaginismus pain felt by girl or female is so much that next time she starts avoiding the sexual contact of any kind because of fear that it will give her pain.
But the fore play & sexual desire excitation & lubrication may be absolutely normal in vaginismus women. For details of diagnosis of its cause & treatment click
Vaginismus ( Pain with spasm at time of entry)
2) Defect in uterus or vagina: Narrow vaginal openings or small vagina, Labial agglutination/fusion, transverse vaginal septum, Complete androgen resistance (testicular feminization), Vaginal stenosis, vaginal scarring, post surgical problems
3) Any ulcerative lesions of vagina as chronic lichen planus, herpes genitals, Pemphigus vulgaris of vagina

Understanding of various diseases for Inability to consummate after marriage by Modern Medicine fails to impress most patients. Only AYURVEDIC MEDICINES HAVE PERMANENT CURE FOR diseases mentioned above of Inability to consummate after marriageWE AT Dr.S.K.Jain’s Burlington Clinic (P) Ltd Lucknow  in valueable guidance of Dr.Saransh Jain Have Permanent Cure.